﻿Performing on the streets of Barcelona

Barcelona is a city filled with the echoes of history. Embedded in the Roman walls or beneath the cobbled streets. Music has been performed on these streets for centuries and the buskers that play in the shadow of the cathedral or amid the hustle and bustle of the Ramblas continue the tradition. The notes bouncing amid the gargoyles may be different but the atmosphere remains the same. People stop to listen and a coin is tossed or a cd bought as singers pour out their souls and the music drifts up over the rooftops. 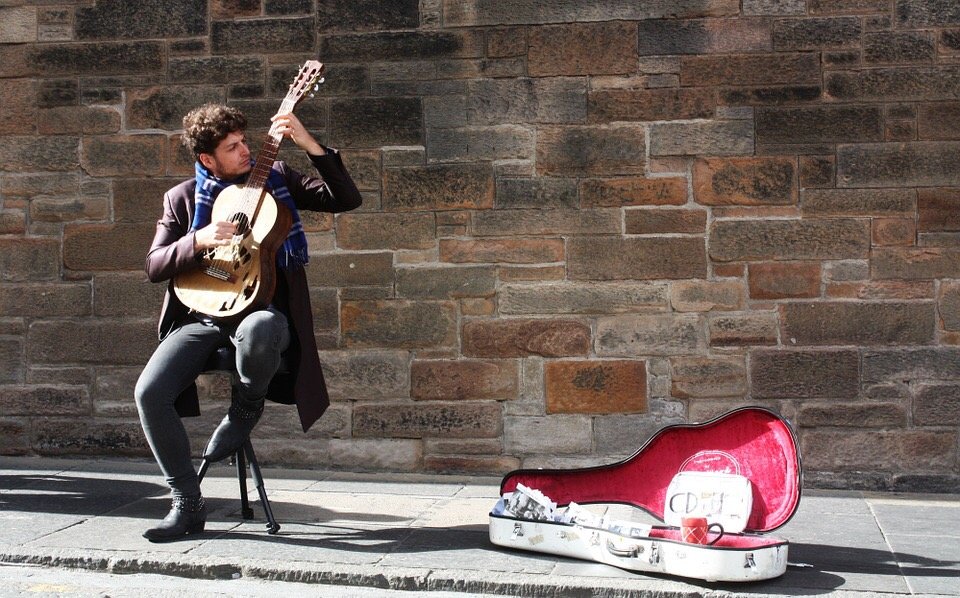 A busker playing his guitar in an alleyway of the Gotic quarter paints such a romantic picture that it has left a profound impression on many people visiting the city. So much so, that performers the world over both amateur  and professional dream of playing live in the streets of Barcelona. Did you know that the word busker actually comes from the Spanish word “buscar” which means to search or explore. And indeed the craft invites people to find new places to play.
So what does it take to play your instrument in Barcelona. What do you need to perform on the streets of Barcelona? Really only a little bit of pluck!  Your instrument of choice, a great place where plenty of people pass by and some courage!

To play a guitar is easy. Simply pick a spot and start. If you need more sound, perhaps ask a friendly bar or restaurant if you can plug in your amp and turn the volume up! But is it really that easy?

Street performances are regulated in Barcelona and you may have the bad luck of being issued a spot fine or having your instruments confiscated. If you are willing to risk it, and many do, the streets of Barcelona are your oyster. You could actually end up making some money, according to an article in the Barcelona Metropolitan, artists could earn over 60€ an hour, and this was in 2014!

The Barcelona government issues coveted licenses for street musicians and if you are serious you could look into obtaining one which allows you to perform at the many spots specifically allocated to buskers.

The shine school of music in Barcelona can rent you a guitar, an amp, cables or a piano even, send us an email to find out more!
Find more info via these Useful links courtesy the Barcelona Metropolitan Magazine. Read their article on busking in Barcelona here

The AMUC website has a list of the current regulations regarding playing on the metro and in open public spaces.

Licences to play in a public space in Ciutat Vella are managed at the Centre Cívic Convent Sant Agustí. Details on how to apply can be found at: www.bcn.cat/centrecivicsantagusti